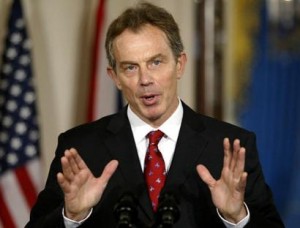 According to the Bible, in the end times, the Roman Empire will be reunited (Daniel 2 and 7). This reunited or “revived” Roman Empire will go through several key stages just like the historical empire. First, there will be a stage where it is ruled over by ten leaders or what we might call the Group of Ten (G-10). After that one man will arise and take control of the G-10 subduing three of the leaders who oppose him. Finally, this one man will take complete control over the reunited Roman Empire and the entire global government for a period of three-and- a- half years. The push for a new office of President of the EU could be paving the way for such a leader to arise. Up to now the EU presidency has been a weak office that rotates among the member nations every six months. It’s more of a figurehead position than one with any real authority.

It appears that a new office of President of the EU is just around the corner and that Tony Blair’s name is already being thrown into the ring. According to the guardian.uk.co (7/15/09),

Tony Blair is a contender to become the first president of the EU with the full backing of the British government, the new Europe minister said today. Glenys Kinnock, in Strasbourg for the opening session of the new European parliament, said that although the former prime minister had not formally declared his candidacy, it was “certainly” the government position to support him. “I am sure they would not do it without asking him,” Lady Kinnock said. “The UK government is supporting Tony Blair’s candidature for president of the council.” The new post is to be created under the Lisbon treaty, which will streamline the way the EU is run if it is endorsed in an Irish referendum in early October. Blair would be the first sitting president of the EU, who will be appointed by European government chiefs for a minimum of 30 months and a maximum of five years. If the Irish back the treaty on 2 October, EU leaders are expected to decide on who will get the presidency at a summit at the end of that month.

This developing story points toward the end time scenario presented in the Bible. According to Daniel and Revelation, the coming Antichrist or man of sin, will rise from a reunited Roman Empire. He will appear first as a rather insignificant player but then will catapult to power over the Group of Ten who will be in power.
Let me make it absolutely clear that I am not saying in any way that I believe Tony Blair is the Antichrist. I don’t believe the Antichrist will be unveiled until after the rapture (2 Thessalonians 2:1-3). I’m strongly against those who claim they know the identity of the Antichrist.  However, I am saying is that this new post of EU President, strikingly foreshadows what the Bible predict for the final world government. While no one knows for sure if the Antichrist is alive today, we can say that the scene is being set for his appearance. Make sure you have accepted Jesus Christ as your personal Savior before it’s too late.

The John Ankerberg Show: The Glorified Jesus Reveals the Future