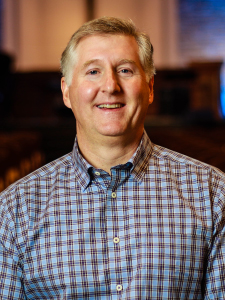 Mark Hitchcock was born and raised in Oklahoma City, Oklahoma. He attended Oklahoma State University and graduated from law school in 1984. After working for a judge at the Oklahoma Court of Criminal Appeals for four years, Mark was led to attend Dallas Theological Seminary, graduating in 1991. Since that time, he has served as senior pastor of Faith Bible Church in Edmond, Oklahoma. He completed his PhD at Dallas Theological Seminary in 2005 and serves as an associate professor of Bible exposition at DTS. He has authored over thirty books related to end-time Bible prophecy that have sold over one million copies. His books have been translated into over ten languages. Mark is a frequent speaker at churches and prophecy conferences both in the United States and internationally. Mark and his wife, Cheryl, live in Edmond, Oklahoma. They have two sons, Justin (married to Natalee) and Samuel, and two grandchildren.

Marking the Times Episode 124- The Vaccine of the Beast

The John Ankerberg Show: The Throne Room of God