We live in a world that seems to be on the verge of coming apart. Shootings. Killer viruses. The threat of nuclear war. All of it is just too real.

Why does the apocalypse craze in movies and video games appeal to so many people so strongly? One answer is it shows us the primal foundations of our existence. In the same way, what’s happening in our world today is moving Christians to return to the foundations of our spiritual existence. Believers everywhere must get back to what matters most. We must always remember that our battle, at its most basic level, is spiritual.So, what are the spiritual tools—the essentials—that Scripture tells us we must remember and use as the end draws near?

In The End Times Survival Guide, you will discover ten spiritual tools the Bible relates directly to our preparation for the Lord’s coming—ten biblical survival strategies to live out in these last days so you and your family can prosper in an increasingly decaying, darkening world. These strategies won’t guarantee your physical or financial well-being, but they are guaranteed to bring life and vitality to your spiritual health and welfare as you cling to the immovable rock of God’s Word.

When life is whittled down to its essence, the real issue is our spiritual condition before God. Discover how you can protect yourself and your family spiritually in these dark days.

Can We Still Believe in the Rapture?

Today, the hope that all believers on earth will be “caught up” to heaven is being challenged in new waves of criticism. Is the rapture really taught in the Bible? Can we really expect Jesus to gather up His followers before the Antichrist is revealed?

In this well-reasoned and thorough defense, prophecy authors Mark Hitchcock and Ed Hindson examine the concept, context, and consequences of the important and long-expected event known as the rapture. Discover the answers to such questions as…

As you explore what Scripture says about the end times, you’ll get a grander glimpse of your glorious future and the deepest hope of every follower of Jesus.

Russia, again, is on the move. The news headlines proclaim it. Georgia was first. Then, Ukraine and the invasion of Crimea. Meddling in the elections of the United States followed. For the fourth straight year, Forbes has ranked Vladimir Putin as the world’s most powerful person―even above the president of the United States. Like it or not, the world has descended into a new Putin-led Cold War 2.0. As the storm clouds gather, America sleeps.

Russian’s hand in Syria and its closer ties to Iran are especially alarming to those who know Bible prophecy and the book of Ezekiel. Putin is poised right now on Israel’s northern border―an ominous sign of our times.

What does the Bible say about our troubling times?

In Russia Rising, Mark Hitchcock, popular speaker and Bible prophecy expert, explores the history of Russia and its current military moves. He will explain the biblical prophecies related to Russia, the Middle East, and the end times. The tracks of the Russian bear lead to the Middle East and Israel. Are we on a collision course with Russia?

Iran and Israel: Wars and Rumors of Wars 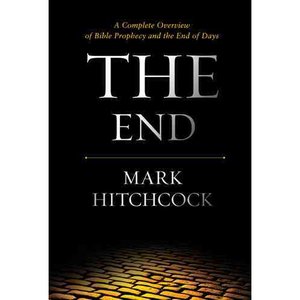 The End: A Complete Overview of Bible Prophecy and the End of Days

In 1958, Dr. J. Dwight Pentecost published his doctrinal dissertation from Dallas Theological Seminary in a monumental book titled Things to Come. This book is an exhaustive study of Bible prophecy and has served as the standard for end time prophecy for fifty years. I had the great privilege to study under Dr. Pentecost and hold him in the highest respect. My goal is for The End, in some small way, to provide for my generation and the ones following what Dr. Pentecost did for his. While no book can or should replace his work, I would like for this book to serve as a comprehensive resource for a new generation interested in biblical eschatology. There has never been a time when it is more important for God’s people to understand the prophetic word and look for His appearing. People everywhere today have sobering questions,  searching questions, about what the future holds. God’s Word is the only place we can find sure answers. Yet, at the very time when serious study and preaching and teaching about prophecy is most needed, its importance has diminished in many churches and in the lives of many Christians. I pray that this work can play some small role in sparking a renewed interest and passion for the blessed hope.

Is it possible the United States, a superpower without peer in history, might not be a key player as the world makes its way down the road to the Battle of Armageddon?

This is the central question explored by prophecy expert Mark Hitchcock in The Late Great United States, a fascinating behind-the-headlines look at numerous current events and how they relate to what the Bible says about the last days.

Americans are accustomed to seeing their country center stage as a world power, but as Hitchcock carefully details, this may not be the case in the final scene. Based on extensive research of the Bible and other sources, The Late Great United States provides compelling and often surprising answers to questions like these:

Regardless of America’s final fate and the outcome of dire events at the end of the age, Hitchcock urges us to find our hope in a God who will not forsake us–no matter what cataclysms we experience on earth.

101 Answers to the Most Asked Questions About the End

For many believers, the subject of the End Times stirs confusion, apprehension, and dread. No longer! This user-friendly manual answers 101 of the most frequently asked questions about everything from the Pre-Tribulation Rapture, the Antichrist, and Tribulation to the Second Coming and the Millennium. Prophecy expert Mark Hitchcock offers a biblically authoritative resource for understanding God’s plan and a reason for peace instead of anxiety about each believer’s role in it.

Or is it? The Antichrist is alive and well today! Or is he? The church is about to be raptured and will certainly escape the tribulation…. right?

When it comes to the End Times, there’s so much confusion. Preachers with elaborate charts share their theories about Revelation and other prophetic books of the Bible. “Ah, Babylon stands for the United States ,” they say. But then other teachers share their theories: “No, Babylon stands for the Roman Catholic Church, or the European Union, or the literal Babylon rebuilt in Iraq ….”

Would somebody please shoot straight with me?

Finally, someone has. Gifted scholar and pastor Mark Hitchcock walks you gently through Bible prophecy in an engaging, user-friendly style. Hitchcock’s careful examination of the topic will leave you feeling informed and balanced in your understanding of events to come…in our time?

The Apocalypse of Ahmadinejad: The Revelation of Iran’s Nuclear Prophet (Multnomah, September 2007)

The Four Horsemen of the Apocalypse (2004)

The Coming Islamic Invasion of Israel (2002)

Could the Rapture Happen Today? (Multnomah, 2005)

55 Answers to Questions About Life After Death (MMultnomah, 2005)

The Truth Behind Left Behind (with co-author Tommy Ice, Multnomah, 2004)

The Second Coming of Babylon (Multnomah, 2003)

After the Empire: Bible Prophecy in Light of the Fall of the Soviet Union (Tyndale, 1994)

The Popular Encyclopedia of Bible Prophecy

Your Final Exam – The Moody Church